Why "Second-Order Thinking" For Kids?

If you want to understand this mind model yourself first, explore a version for parents.

If your child has never heard about the mental model of second-order thinking you can drastically improve his or her decision making skills. This in turn will make your child's life much easier by sky-rocketing their problem solving skills and preparing them for the responsibilities of adult life.

What difference would it make for you personally if your child could:

How would it impact your life? Your family?

You wouldn't trust builders without appropriate equipment to build your dream house, would you? Then why rely on luck when helping your child create a secure future without the right tools?

You see, second-order thinking is a crucial mental model that makes your child's life so much easier. Let's see how he or she can use this tool to build a better life.

What Is Second-Order Thinking? 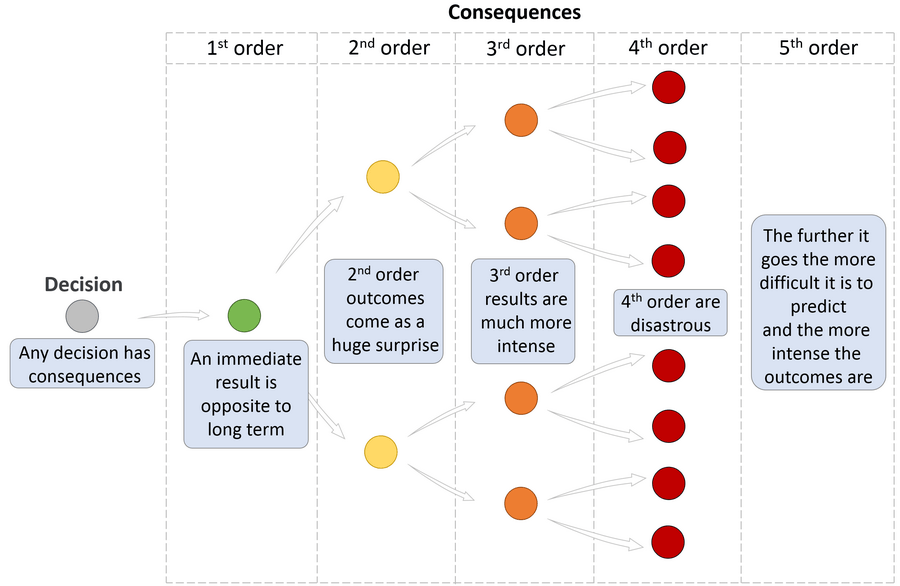 How Can It Help Me & My Child?

Now, if you are asking "What's in it for me and my child?" you are doing the right thing!

Because if your child understands this principle and uses it when making daily decisions he or she (and as a result you) will have a much happier and brighter life.

To prove this point let's look at a specific example. And guess what? Who said that training must be academic and boring? Let's make it fun & engaging so it's easy to remember and apply daily.

Upskill Your Child In 15 Minutes

Let's use the "Second-Order Thinking" module from our self-development training for children platform to demonstrate how any child can be upskilled in just 15 minutes or less without being bored and without you having to do any heavy lifting...

Is This Really Happening?
On the 27-th of November 2023, 747 families from different parts of the world are contacted by their National Security Agencies. They leave parents no choice: all kids must pack immediately to take part in a massive initiative to protect the planet from an unprecedented disaster. Having gone through multiple excruciating trials, 8 kids are finally selected to form a special squad. No one has an idea on what's going on... 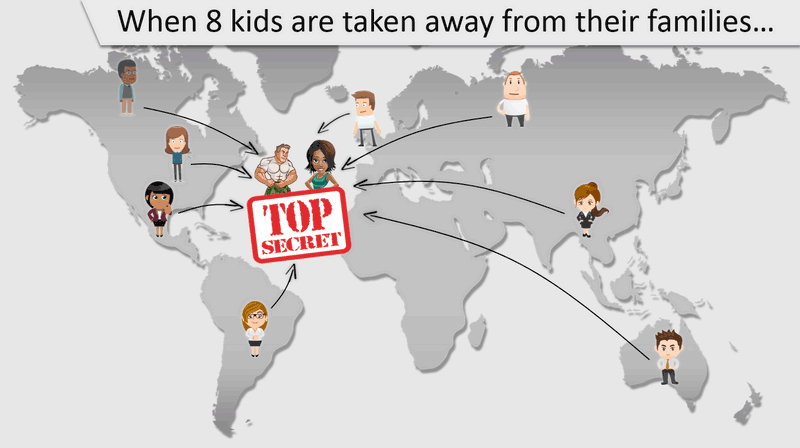 But this was just the beginning...

Just when you thought it couldn't get any tougher... On the way to a secret base their helicopter crashes before reaching the island. While no kids are hurt it's not looking good... Left without crucial equipment and completely lost on the mysterious and dangerous island, the group can only survive if they find the secret base and manage to break into it. 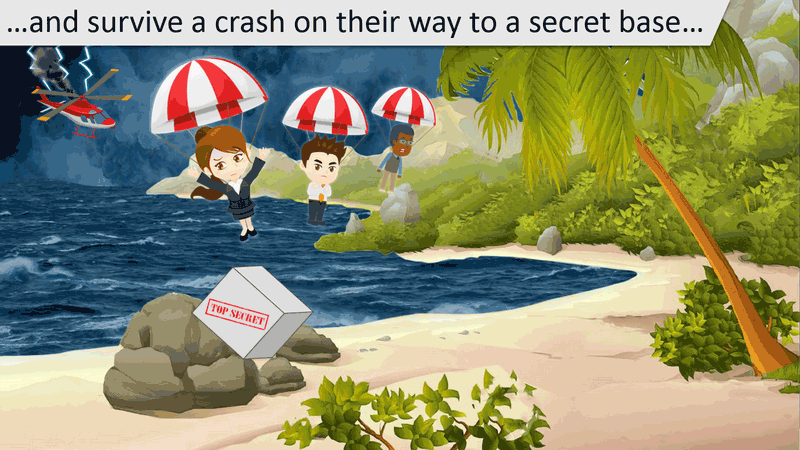 As they try to make sense of and sometimes survive the unexpected characteristics of the island, new life time friendships are formed. Having to go through both physiological and psychological challenges, they share their stories with each other along the way.

Improving your child - Ana's heartbreaking backstory
On the cold night of December 17-th 2021 Maria Fernandes shares a heart-breaking story about her sister Ana who ruined her life due to silly teenage behaviour that could have easily be prevented.

A shy Ana couldn't say no to a group of "cool" girls who bullied another person from the class. When her dad found out about it, he insisted Ana stops hanging with the trouble girls. But her daughter didn't listen because she was afraid to be judged and rejected by the group. 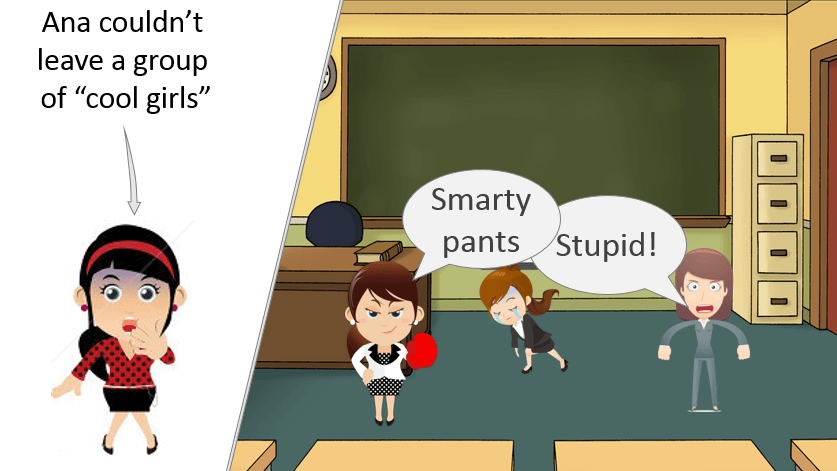 The fist-order consequence felt nice...
Can you see what's happening? Ana made a decision not to address the problem of being influenced by the wrong group. What is the first order consequence here? A relief of not having to deal with peer pressure. It's critical to understand that almost all bad long-term decisions have immediate positive consequence. But this way of thinking without taking into account long-term impact is completely flawed. Let's see what happens next...

Not using second-order thinking backfired badly
The shy girl has been ignoring parents' advice for a long time now without realizing the true cost. What Ana failed to notice is that she started saying YES to unreasonable requests from her peers all the time. She lost her own identity and couldn't make her own decisions. 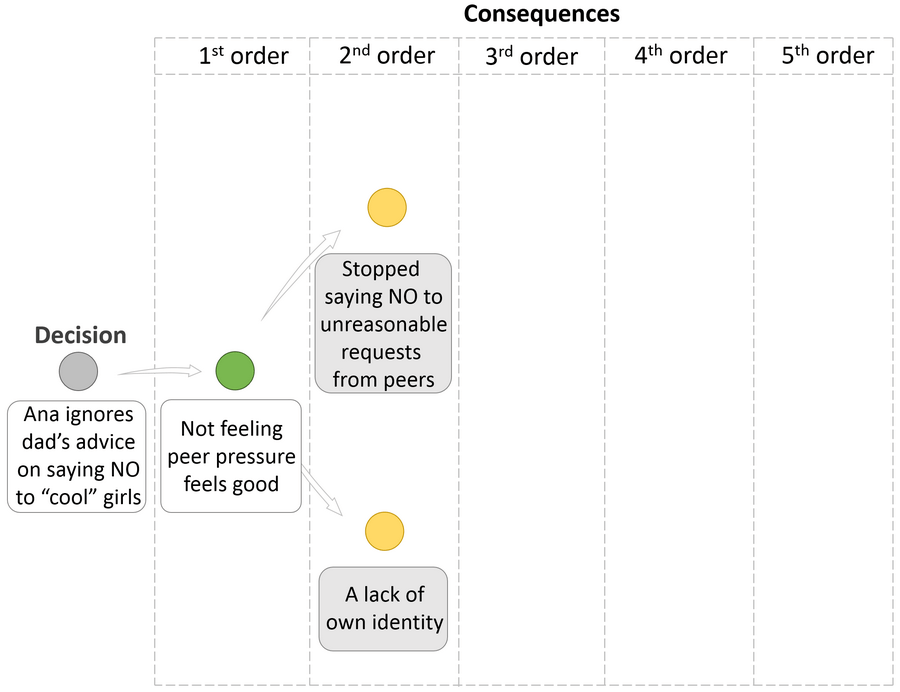 Unable to cope with constant peer pressure she eventually makes a series of catastrophic mistakes:

What's happening? Correct. These are not random circumstances. They are systematic 3-rd order consequences of the original decision to not listen to her parents. 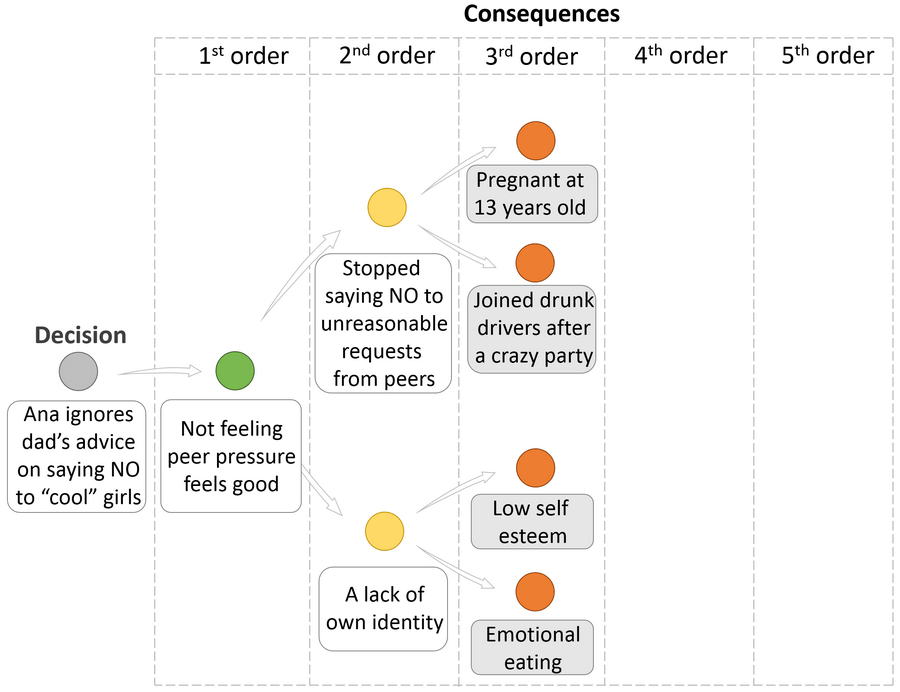 But does it stop here? What about the 4-th order consequences? Such as having to abandon her childhood and become a young single mom while still being a kid herself? Having to live with the guilt of the accident even though it wasn't her fault? And being stuck in a lousy job for years? Unable to find a caring partner to be in a good relationship? While having serious health problems? 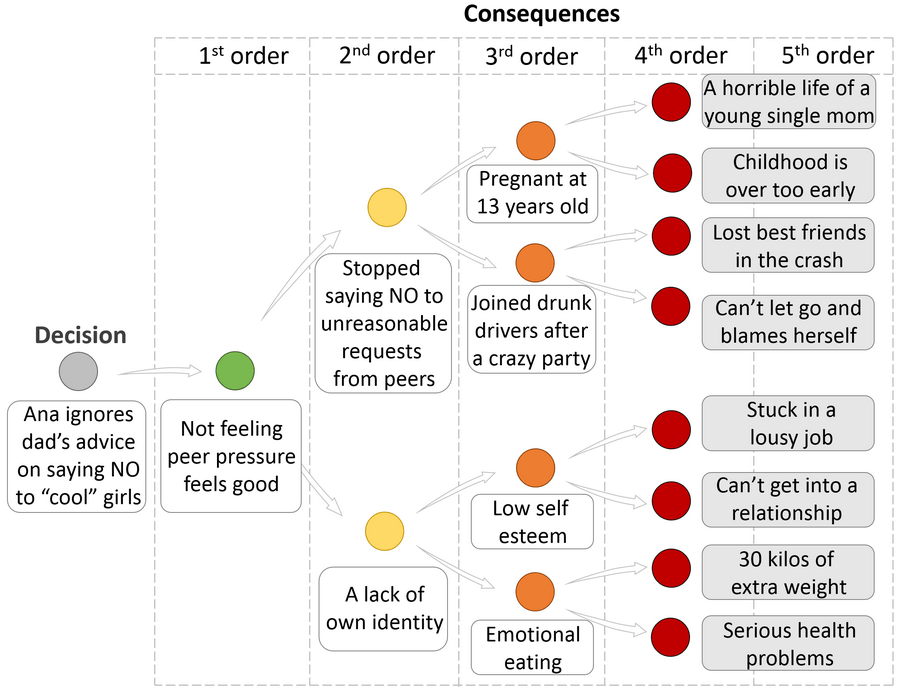 When Maria is done with the story of her sister's life she breaks down emotionally and starts crying. It's been hard to watch her older sister struggle in life.

Improving your child - Don't you see where you are going Nick?
Touched by the heartbreaking story of Maria's sister, Nick opens up and explains what's been happening in his life.

He doesn't remember how exactly he got addicted to technology but the amount of screen time has been enormous for him. The young Australian explains to everyone how hard his life currently is:

Having heard Nick's story, Maria draws a simple diagram on the ground that looks like this: 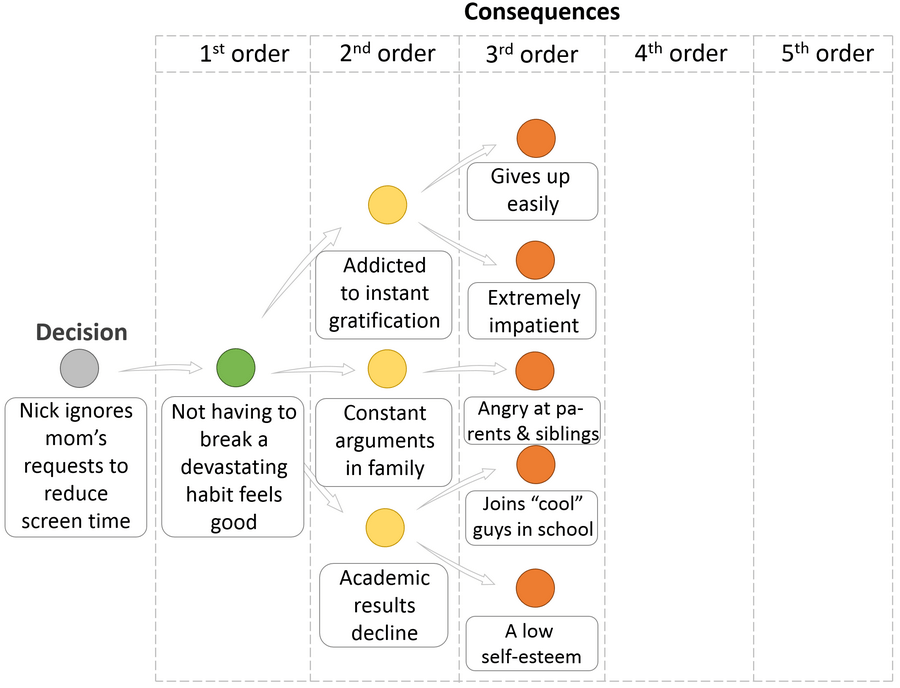 "Don't you get it? Can't you see where you are heading to?" - replies the smart girl. 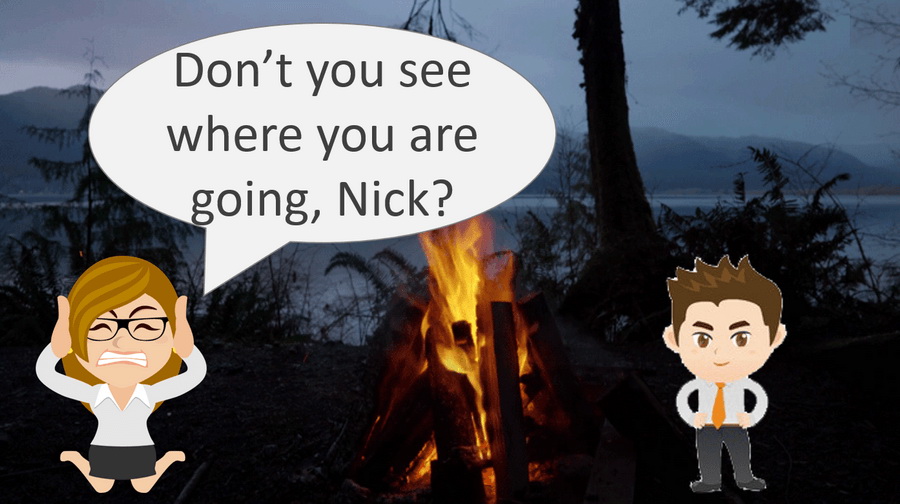 She introduces Nick to the mental model of second-order thinking and explains the root cause of his long term struggles: his decision to ignore his parents's requests to reduce the screen time.

"Don't you see what's happening to you!? You are heading in the same direction as my sister Ana!". "Look at the 4-th order consequences!" screams Maria and completes the diagram. 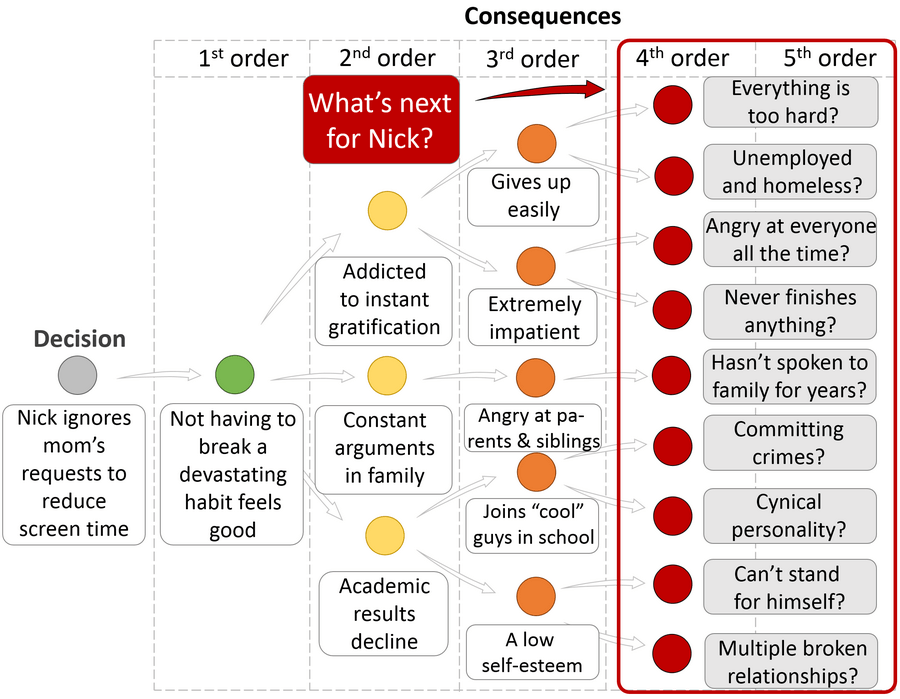 Looking at both stories, can you as a parent see how one simple decision can lead to catastrophic results? And how it can shape your child's life? The question is what is your son or daughter doing or not doing to build the life you've always wanted for them? Are they making the right decisions now?

Do you think their life will be much better if they understand and start using the principle of second-order thinking? The answer is obvious. Why wait for them to fail badly and discover the consequences when it's too late? They need this training now. They need to start making the right decisions now to live a happy and financially secure life.

And This Is Just The Beginning...

If you liked this training on second-order thinking you will be pleased to know we are just scratching the surface here. Because we have so much more for you and your child(ren).

And it's all wrapped in our innovative learning platform for children with interactive, engaging, micro learning modules that kids love going through. Because it's like watching their favourite show.

Imagine your child becoming a successful young adult and building a great life by watching and interacting with the blockbuster movie? By falling in love with the main characters? By improving their life through entertainment.

But let's get back to the story...

How the story unfolds...
Accompanied by colonel Anderson and agent Pamela Brooks, the kids waste no time after the crash. Both adults understand that the only way to accomplish the mission is to build a brilliant high-performing team of incredible achievers in record time. Because there is no other choice but to find the secret base and resume the operation.

That's why they work with the kids on getting full clarity, setting goals, and planning their next moves. What comes out of that exercise is the decision to split into 2 groups.

The group led by Pamela will stay close to the crash place. Their main mission is to find the missing equipment and hack access codes to the secret base. Meanwhile the second group will focus on locating the perfectly disguised base in the middle of the island. As both teams struggle to achieve their goals, they have to laser focus on truly important things and ruthlessly eliminate everything that doesn't matter to make up the lost time due to unforeseen circumstances. And just when Anderson's group finally finds the secret base, the leader is seized by the unknown forces. This huge and unexpected twist becomes a major turning point in the whole story. Everyone understands that in order to save the colonel they must take their game to the next level... 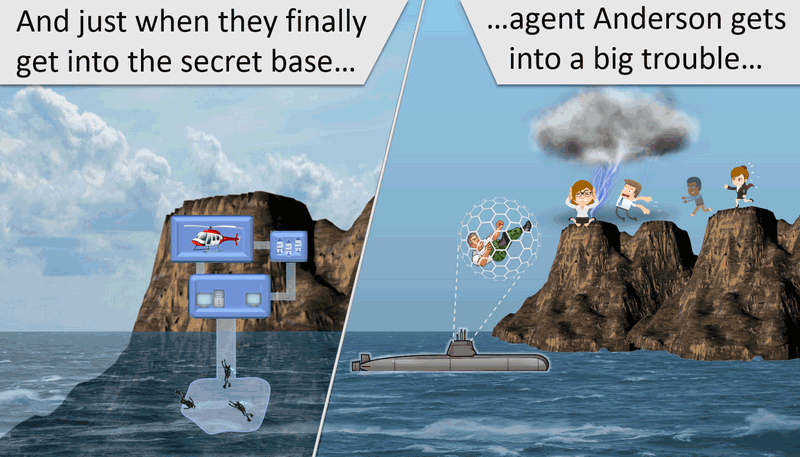 They make mistakes and they fail. But they keep going. They become more resilient. They develop a growth mindset. They learn to communicate better and to make better decisions faster. They become incredible achievers. 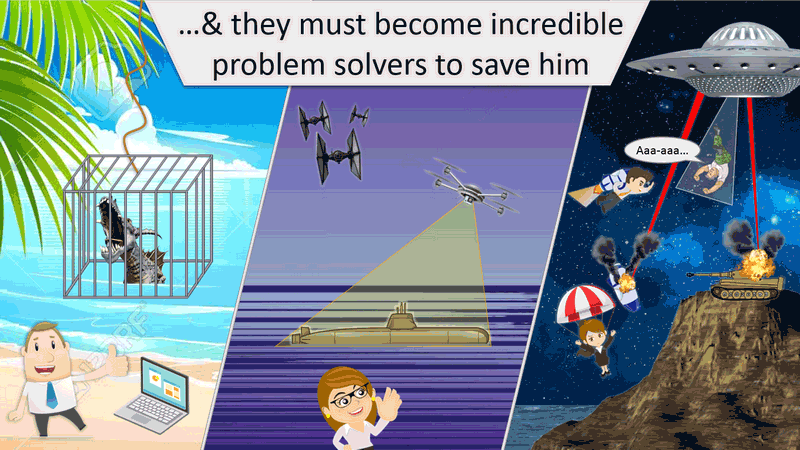 Can they accomplish the mission?

What IS the mission?

If you think your child will love this format of personal develoment training (which they will) and if you are interested in finding out more about this training platform or you can't wait to join already, enter your name and email address below and we will be in touch.