Brian Tracy has risen to success; from a trouble-maker, in a poor family that struggled to pay the bills, to the President and CEO of three multi-million dollar companies based in Solana Beach, California; one of these companies is his own, and named aptly.

He now travels extensively throughout Europe and the Pacific, through South East Asia and the USA and Canada. He has traveled and worked in over 80 countries and across six continents in the world. He speaks four different languages and carries a simple message . . . "I believe through learning and the application of what you have learned, you can solve any problem, overcome any obstacle and achieve any goal that you set for yourself." And the proof of this message is the epitome of his corporate achievements, as he has authored over 40 books, recorded more than 300 video and audio learning programs and coaches live audiences of more than 250 000 strong annually.

His research and teachings have been developed over 25 years and have become some of the most effective learning tools in the world today; with titles like 'Advanced Selling Strategies', 'The 100 absolute unbreakable laws of Business Success' and 'The 21 Success Secrets of Self-Made Millionaires''.

He is also a family man, happily married to the love of his life Barbara, and together they have four children and live in San Diego. His life has been a testament to a personal philosophy of no-frills, no-nonsense and no-excuses to becoming a success; with a pull-out all the stops and a-work hard attitude.

Brian was born in Vancouver, Canada in 1944, to a class that had constant money worries and bills that went unpaid. His dad couldn't hold regular work, so he and his three brothers were used to living with charity clothes and possessing little in the way of luxuries.

His parents were upstanding citizens with high morals, but they also spoke a mantra of . . . "we can't afford it, we have no money," and so they struggled throughout the years. So, from the time Brian can remember, he always had a curious unction to know, why other families enjoyed a higher quality of life and yet, they were in a quagmire of money worries.

He dropped out of school early and began a young life of hard, physically demanding work; until he began traveling in his 20's.

Brian often speaks about the fact that 'people become what they think about most of the time'; and also, he talks of studies that have proven - multi-millionaires meditate mostly upon financial independence.

Travelling around the world

At 20, Brian had had enough of low living and began to travel. He took his car out of Canada and then toured through North America, before catching a ship to England.

From there he cycled through France and Spain and on to Gibraltar. His travelling lasted eight years and took him through the likes of Sahara Desert, with friends where he had a near death experience through the harsh landscape.

Surviving many dangers and adventures, his life began to take shape and he worked alongside the famous Dr. Albert Schiweitzer in South Africa. He also trained and gained the black belt in Shotokan Karate.

After living two years in Johannesburg, he left and traveled some more. He briefly worked in London and then toured through areas of Europe and the Middle East; eventually coming out of India and on to Malaysia, Singapore and settling again for two years in Thailand.

His track record so far has found him in more than 80 countries throughout the world.

Brian Tracy's Philosophy may be hard to grasp by some, but he is an example that has gained a huge following and a massive rapport with super-successful results . . . "Read, listen, continuously learn and grow. You can learn anything if you really want to." And for 50 years, he has done just that. He reads for three hours a day and has completed somewhere between 6000-7000 books. He says, "Never let your car be moving, without having you learn something. Every book and seminar imaginable is available on audio."

His philosophy came to him when he'd been a vagabond for too long and assumed life was a result of external circumstances, beyond his own control. But he woke up, and realized that he was responsible for his own life. It was up to him to actively seek answers, and he was the only one who could do anything about it. Later in his life he went on to write a most amazing book, which has revolutionized countless thousands of people: titled, 'No Excuses.'

When he finally woke up and realized, he was the only one who could make himself a success, or a failure, he began a sales job; albeit haphazardly: he was a little rough around the edges. But after quizzing other successful sales people and reading profusely, he began making goals and achieve those goals. One such goal was to become the most successful sales person and he pursued it wholeheartedly. He learned all he could and tried many ways of approaching sales, until he became 'number one sales manager.' After mastering sales he moved on to bigger and better occupations: real estate development, business theory, marketing; whatever he put his hand to - he excelled. He studied those industries and became an expert in many fields; eventually attaining the position of Chief Operations Officer of a 265 Million dollar development company.

Over the last 30 years he has amassed his learning and worked to make concrete and foolproof systems which are leading many others to their successes. He has a passion to pass on this information to any who are teachable and want to grow from what he's learned. Through his trials and his errors, and good old fashioned hard work he has become an ambassador of success.

To achieve his desires and to pass on this information, he developed a university, his university . . . The Brian Tracy International, in San Diego, California.

Learning from the best

Brian committed to become a lifelong learner, right from his early 20's as he began reading all of the classics like Napoleon Hill, Claude Bristol, Orson Swett Marsden and others. He was (and still is) a voracious reader, putting more than 7000 books under his belt to date!

He reads continuously and from many vast topics; anything from raising children to world history, economics to phycology; his personal interests were not a limiting factor. By 1981 he had decided to compile all of his learning into a comprehensive system of self-helps to success, and to unleash his wisdom and experiences upon the world, for all to learn and grow from. He said 'he had attended too many seminars that were simply full of fluff,' and decided he would create something of a much higher quality.

He stands upon a set of principles which include 'taking responsibility for your emotions; they can actually be controlled.' And also, 'that you must be crystal clear about the goals you are setting yourselves; don't let your emotions cloud your judgments, or your rash-negative thinking cause you to act ill towards achieving success.'

He says that 'negative emotions will cause your brain to shut down - and a result of that, is poor judgment and bad decision making.' We must remain positive. Cultivate clear, self-perception and a level head and be responsible for deciding to interpret your world in a positive light.

His dynamic approach to learning has influenced more than 5 000 000 people throughout the USA, Canada and 55 other countries' worldwide. He has studied vast topics from economics, personal development, and history and business philosophy, and has become an expert in many fields.

With his voracious learning he has been called upon as a key-note speaker and seminar van, to crowds of 250 000 annually. He has also been a business - and executive business consultant to more than 1000 companies worldwide. He talks on topics such as selling and marketing; self-esteem and goal setting, and how to create psychological changes that bring about immediate and long-standing success.

He is the CEO of his company, Brian Tracy International, where he trains and develops individuals and corporations consistently with a focus to achieving personal and also business goals, quickly and efficiently. The results from his training are helping 1000's to reach their goals in record time.

He is also a well-respected author of more than 45 books, which have been translated into dozens of languages.

Many of his authored or co-authored books include titles such as 'Maximum Achievements, Eat that Frog, Time Power, Including Goals and The 100 Absolutely Unbreakable Laws of Business Success,' and are globally successful. These, and other titles have been translated into many languages.

He has produced over 300 audio and video-learning kits, including the worldwide best seller 'Psychology of Achievement'. He has developed a fantastic University, which trains scores of individuals every year and paves a 'road to financial freedom' for anyone willing to learn.

He is a happily married family man, and together with his wife Barbara, they are raising 4 children.

Brian Tracy is a 'General of Business Success,' an example of what can be achieved; and a highly sought after conference speaker.

His wealth of knowledge and wisdom has been developed over many years; from humble beginnings - being raised in a poor family, to a global leader. Brian has 'walked the road to learning' that countless others dare not tread; and along his way he has created a mass of followers' hungry to learn and succeed themselves.

His simple philosophy is that . . . "through learning and the application of that learning - you can solve any problem, overcome every obstacle, and achieve any goal your care to set yourselves." His many books and hundreds of audio/video trainers hail the truth of that, and are found all over the world today.

He shuns the mantra . . . "we can't afford it, we can't afford it," and opens the door to . . . "No excuses! You can do better than this . . . shake off those negative thoughts and uncontrolled emotions - and learn, grow, and apply - by deliberately deciding to interpret your world in a positive way."

Brian never ceases to learn something new every day, because he realizes that a life time of learning will place you in the company of the greats, which have passed this way before. 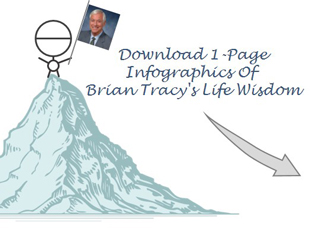 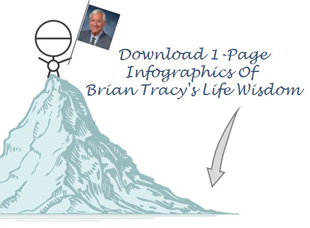