It's impossible to thrive in the world of rapid change and insane interconnectedness without building an effective defence perimeter around your mind. Jim Rohn said it well: "Every Day Stand Guard At The Door Of Your Mind".

... the results you are aiming for will never arrive.

And even if they do, the progress will be excruciatingly slow. Both motivation and passion will evaporate like they never existed before. What's more, the life style of "I will just pay bills and die" will kick in. Not good. Because as human beings we are only happy when we grow and things are under our control.

To protect the garden of your mind from poisonous weeds of negative inputs imagine a mind guard team sitting inside of your mind and protecting the perimeter. A green bulletproof wall around the conscious mind defuses any unconstructive input that tries to penetrate into your mind. No harmful information or self-defeating thoughts can get in. Rock solid defence delivered by unshakeable guards. 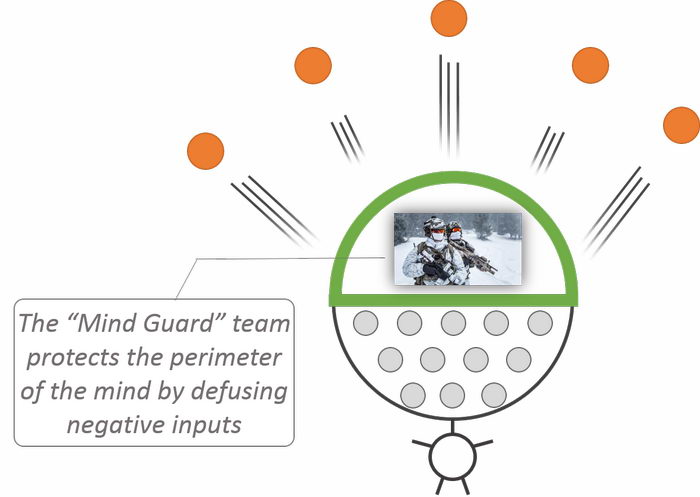 Those who understand the enemy are already half-way through. Want to win BIG in life? Ask quality questions! Here is the one:

What are these weeds that constantly pollute our minds?

To answer this question we need to go back to the Understand The Mind series. You will recall that there are 3 negative forces engaged in a cruel war against the only positive force of powers. 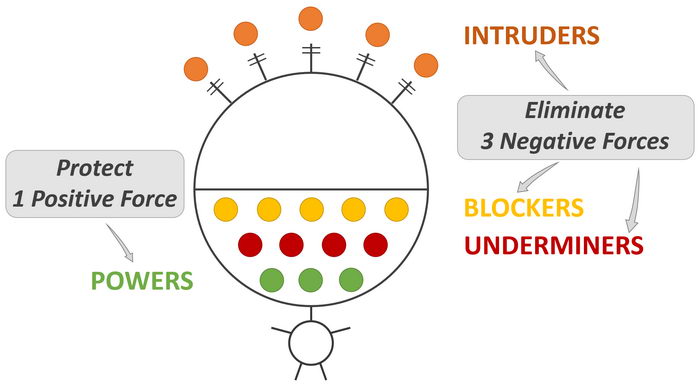 Unfortunately, the negative forces dominate in most people's lives as proven by multiple research studies in the field of mindfulness.

You are aware and prepared to fight back. Which you are now ! So, it's time to zoom in and take a closer look...

The three directions of defence

To effectively protect the perimeter of your mind, prepare to being attacked from the following three angles: People is the first force we have been constantly attacked by: Put together a list of 7 people who have been dumping trash into your mind. Even if they are family members.

Do they criticize you unconstructively such that you can't improve by learning from the feedback ?

Or do they put you in a mental jail of self-doubt and inadequacy?

Decide now the time has come to stop those invasions into your successful future. Don't let them steal your time and passions. Learn actionable mind protection strategies to deal with people like that.

In the era of insane connectivity, those who can reject negative and overwhelming information coming from the technology will do exceptionally well in life.

What are the other technologies that are bombarding your conscious mind every single day?

The third major enemy attacks from within. And it's probably the most devastating force out there. It's been calculated that an average person has 40,000 thoughts a day and most of them are negative, self-defeating or unconstructive ! Your mileage may vary however. But travel just an hour back in time and remember what your thoughts were in the last 60 minutes.

Step 3 - Executing The Plan Of ​Defence

If you truly want to break out in life and get this dream job and/or build a powerful business while having enough time to spend with the people you love there is no other option but to protect the perimeter by deploying the mind guard team.

You have no time for crap from others, stupid technology, and your own self-defeating thoughts.

Keen to create the plan of attack defence to stop being ambushed every day?