If you've heard the statement . . . 'Think and Grow Rich,' then you have heard of Napoleon Hill. He is the man responsible for coining the phrase and writing one of the bestselling books in history, titled as such.

Napoleon was born in Wise Country, Virginia, in 1883. He was a young man with an incredible amount of potential who became a local 'mountain reporter,' at the tender age of thirteen. And from his humble beginnings he went on to becoming the granddad of the personal success genre, influencing countless millions with his philosophy, and achievement mantra . . . "what the mind of a man can conceive and believe, it can achieve." He was the first author to write about, and make public, the connection between success and the powers of the mind; and his life-work has become the chief cornerstone of modern motivation.

Although he was forced to fund his own education, because of the loss of his parents at an early age, he became one of the most beloved motivational authors and founder of a 'non-profit' education institute, with a mission to perpetuate his philosophy of leadership, self-motivation and individual achievement.

He died on November 8, 1970 - a sorely lost leader and example of personal belief and the success of an individual. Still his influence goes on after him.

Born in the rural town of 'Pound', in 'Wise Country,' Virginia in October, 1883 - a prophetic name of what his future achievements would hold for him.

Before he was even 13 years old he became an orphan, as both of his parents had died. As a result of his loss, he was known to be a rebellious child. Even so, he busied himself as a 'mountain reporter,' doing articles for the local newspaper, and by the time he was 15, he was writing articles for many small town newspapers. He was saving to go to law school.

Unfortunately, because he was not making enough money to cover costs, he had to drop out of law altogether. His passion for writing soon brought him before many powerful and influential people of the time. While meeting and interviewing one of these influential people, he took an opportunity that would see him dedicating more than 20 years of his life in pursuit of, 'defining the reasons of people's failure to achieve financial success and happiness.'

His big moment and lifelong pursuit was discovered in 1908, when Napoleon was working for a magazine by Bob Taylor's and was assigned to interview one of the most influential men of the time, Industrial giant Andrew Carnegie. Carnegie was the magnate of Pittsburg Steel, a billionaire - and during the interview he put a 20 year challenge to Napoleon, which he accepted and it changed his life.

Carnegie had a simple belief that 'the process of one's success could be summed up into a single formula that anybody could understand.' He also stated, 'how much of a shame it is, that every generation must find the way to success by trial and error, when the principles of success are simply clear-cut.' Carnegie's challenge was, that if Napoleon would commit to 20 years, without compensation, to compile together the principles of success from the country's greatest business men and leaders - seeking out the common denominators of their stories; then he would introduce Napoleon to the most wealthy and successful men of the time. He took up the challenge and over the next 20 years he met and interviewed more than 500 successful people, many of them millionaires'. Among them included: John D. Rockefeller, Alexander Graham Bell, Theodore Roosevelt, Thomas Edison, Henry Ford and many other contemporary giants.

As a result of his research of more than 20 years, he became the editor and publisher of his own 'Hill's Golden Rule Magazine,' he developed numerous study courses and published various works, including 'The Law of Success by means of the Philosophy of Achievement,' and 'The Ladder to Success;' and an intense home-study course (17 volumes), titled 'Mental Dynamite.' Another achievement was the fact he became an adviser to Carnegie and also an unpaid advisor to President Franklin Roosevelt from 1933-36.

His astounding book 'Think and Grow Rich,' has consistently achieved incredible success and is a highly sought after wealth of wisdom, for many; even 70 years on, it still remains in the top six 'best-selling business paperbacks.'

Since its conception after the 30's depression, where it sold more than 1 million copies, it has not stopped breading success within the many millions of readers it has touched. As it is now, it has sold over 30 million copies worldwide.

The book has been the formula and a call to action for any American dreamer 'who dares to conceive an idea,' and more . . . 'who dares to believe it.' Napoleons philosophy of personal achievement has set in motion - in the minds of its readers - a creative visualization and understanding of the law of attraction. This book uncovered the pot of gold at the end of the rainbow for Napoleon himself, and still uncovers the substance of success for those who dare to read it today.

He took his cherries from the many business people he had been commissioned to interview, and broke down the basics of the philosophy of achievement, and then published it, as he was challenged as a young man.

With all of the high living, raging success and achievements in the 1940's that Napoleon had discovered along his journey, he was met with disaster as him and his wife Rosa, fell out of their relationship; a great chasm had begun to divide them. This ended in a messy divorce that saw Rosa walking away with virtually all of his royalties from his successful book 'Think and Grow Rich!' His life's work was literally snatched away from him.

He moved away to South Carolina with a view to start again, and at the request of William Plumer-Jacobs. William was the president of a college and also a publisher; he asked Napoleon to create and print a 17-volume self-improvement study course titled 'Mental Dynamite. The project was unfortunately haltered by the onset of WW ll, and the rationing of paper and production.

While Napoleon was lecturing in Chicago, after the 30's depression, he had no idea how much his book 'Think and Grow Rich,' had impacted the president of the Combined Insurance Company of America, until the president - Mr. W Clement Stone, began head-hunting him. Mr. Stone had been struggling through the years of the depression and at one point stumbled upon Napoleons book, and was so impressed with the work that he bought many copies for his sales staff. Having distributed the copies to all of them, he soon began amassing his fortune as the salespersons quickly rose in skills, and excelled in their achievements.

Soon the pair developed a friendship and by 1952, they entered into a partnership and produced many books, courses and radio/TV programs etc., they also published inspirational messages in a magazine called 'Success Unlimited,' which was the forerunner of 'Success Magazine.' The format of this magazine was similar to Napoleons 'Hill's Golden Rules Magazine.'

They also co-authored the book 'Success through a Positive Mental Attitude,' which became an instant 'best seller in 1960.

Napoleons philosophy, 'what the mind of a man can conceive and believe, it can achieve,' gelled with W. Stone's own philosophy of personal achievement - 'thoughts are things,' and from it, Napoleon began teaching that, an individual can manifest their own success by simply sharing ideas with other likeminded individuals.

He wrote about belief and faith and the importance of the 'golden rule', to understand the difference between giving to the community, and exchanging with the community.

Because of a challenge put forward by the billionaire Carnegie, Napoleon found his message and changed (and continues to change) many others lives, including his own. Through his many writings and presentations, he developed over his life, his influence goes on after him. His open faith in Christ and philosophies of 'what the mind can achieve, if you believe,' has become the standard for the 'philosophy of success,' and the teachers of it, across the globe.

The research formulas Napoleon developed through his 20 year search of successful people, still causes countless millions to take responsibility for their own lives, and to visualize success; to attain lives of importance that they may never have believed possible.

His books have sold millions of copies and he has not shied away from controversies that lay within the pages. He has written on things such as racism, slavery, war, oppression and poverty - and he has introduced the philosophy of perseverance and success, regardless of the obstacles'.

Carnegie challenged Napoleon to pass him at the grandstand with a declaration he made him to speak . . . 'Andrew Carnegie, I'm not only going to equal your achievements in life, but I'm going to challenge you at the post, and pass you at the grandstand.' Napoleons response was that of absolute protest, stating it could not possibly happen. But Carnegie pressed him and said, "Of course I know you're not going to be able to, unless . . . or until you believe it! But if you believe it, you will!" Napoleon may not have passed him in such a fashion over his lifetime, but this shook him up, and in a way he did . . . because his enormous wealth was stored up within the many millions of people who grabbed hold of Napoleon's message and then began believing in themselves, with incredible results.

Napoleons last book was published after his death on November 8, 1970. It summed up his own life in its simple title . . . 'You Can Work your Own Miracles.'

From a young, rebellious 'mountain reporter', with no family - to the founding granddad of 'the connection between success and the power of the mind' philosopher. He has been credited to have influenced the most people in all of history, in the genre of motivation and success. Not bad for someone who dropped out of law school, because he could no longer fund his own education.

His lifelong mantra, 'what the mind of man can conceive and believe, it can achieve,' and his bestselling book 'Think and Grow Rich,' has showed the entire world how to take responsibility for their own personal success; and he has become one of America's most beloved motivational authors. He has sold more than 30 million copies of his titles over his lifetime, and still today, this particular book holds its place in the top 6 of all paperbacks on business.

He learned - via his many interviews, from the most influential men of the day, and has passed on this wisdom, and that of these high-caliber players. He went on to break down this wisdom into many volumes and writings, eternalizing them into a formula to success, which anyone can grasp.

His dedication to the challenge put forward by the wealthiest man of the day, Andrew Carnegie, changed his life. Carnegie's commissioning of this young man, and his promise to put him before many of the most powerful men of the day, caused the world understand the power of simple principles, which are really, 'clear cut.' And in turn, even after his death in 1970, Napoleons studies continue to emulate the same, within countless others who have taken onboard his greatest philosophy 'Think and Grow Rich.' 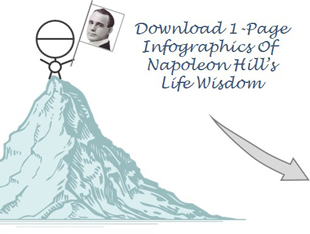 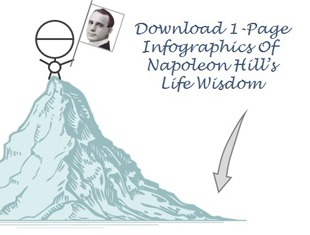