Born in year 1926 in Alabama, the infamous Zig Ziglar is one of the world's most popular and motivational speakers. His real name was Hilary Hinton Ziglar but the man came to be known as Zig Ziglar as his alias which originated from his pet name in elementary school during the 1930s in Mississippi. He went to college in the same state in the city of Jackson and attended university at University of South Carolina.

His humble initiation and even his first job as a salesman never stood in the way of his positivity, the output of which yielded him great fame and prosperity. From being an exceptionally good salesperson, he moved on to becoming a famous author following which he became renowned for being an excellent motivational speaker. His work provides guidelines on self help and positivity, which he implemented into religious beliefs thus concocting his very own philosophies.

Before he died of pneumonia on November 28, 2012, Ziglar altered the minds of many millions of people, including American presidents and many other great leaders of the world during his 40 year long career as a speaker. He journeyed more than five million miles in his efforts to awaken the world and also assisted 500 companies in their work by providing them advice.

Zig Ziglar was born tenth of twelve children to Lila Wescott and John Silas Ziglar in Coffee Country somewhere in southeastern Alabama. Most of his childhood years were spent in Yazoo City of Mississipi where his family moved in 1931 when his father got a job at the Mississippi farm as a manager. At this point in time, young Zig was five years of age and a year later both his father and younger sister passed away; the father of stroke and the sister following suit two days later. Thus with the already prevalent hardships that a family of meager income and many mouths to feed had to face, the family was left in the care of Zig's mother alone whom Ziglar describes in his autobiography as "a remarkable woman" for her toils and the equipment of values and morale that she provided him with.

Perhaps this is what taught Zig to take up his fortunes in his own hands and so after serving the United States Navy during the Second World War as a V-12 in the Navy College Training Program, when he went to University of South Carolina which is located in Columbia, he took up a part time job as a salesperson and sold pots and pans for the WearEver Aluminium Company where he gained skill and tactic and soon excelled greatly in his work.

In 1947, Zig Ziglar moved to Lancester and began selling cooking equipment as a full time job after he dropped out of college. Zig Ziglar also credits P. C. Merrell, a divisional supervisor at WearEver for changing him altogether by believing in him and giving him advice.

Zig Ziglar has provided coaching for making extravagant sales by disclosing the tactic and strategy which he acquired from his experience and intellect. The audiobook, Zig's Secrets of Closing the Sale provides effective methods to make a great sale and is an absolutely brilliant training program. He mentions how his values have stood as foundation for his persuasive abilities. Zig Ziglar has had both audio and video training programs which have eventually landed him on radio programs and television shows. First Baptist Church in Dallas has hosted his Sunday school classes for a long time and these have been aired as well.

One of the world's most eminent sales Trainers, Zig Ziglar decided to assist people to devise effective strategies in order to become successful in their lives both professionally and personally. The name Zig Ziglar thus became identical to certainty, progress and inspiration. The New York Times, The Washington Post, Fortune, Success, The Dallas Morning News and Esquire have all recommended Zig Ziglar for his inspirational speeches. Zig Ziglar has also been promoted in 202/20, 60 Minutes, The Today Show and The Phil Donohue show where he warmed the hearts of many on account of his lively spirit and intelligent uniqueness. "How to Stay Motivated" is his leader and one of his many books and audio and video training programs.

His first book about self assistance was "See You at the Top" which was published in the 1970s which was reprinted many times but never lost its zeal. Ziglar has also contributed to the Congressional record of the United States in his discussion about the American lifestyle. Zig Ziglar Corporation in Dallas holds more than 60 staff members and utilizes full effort to help people realize their mental, physical and spiritual capabilities. Over the last 30 years, Zig Ziglar has gained devoted followers from all over America due to his inspirational work.

Zig Ziglar gains his profound interest in helping other people from the strength of his beliefs in God. His favorite phrase remains to have been about assisting other people to get that which they desire in order to get that which one desires for one's self. Zig Ziglar was a Christian and some of his work seems to notably have subtle messages about God and Christianity.

His words always seemed to be conveyed straight from his heart and amid his messages about honesty, integrity, hard work and virtue, Zig was a comfortably encouraging person. He seemed to make his listener understand that one could do absolutely anything at all. His speeches always ended with 'if you do this, and by you, yes I mean you, I will see you at the top." which naturally gained him respect, love and admiration. He always provoked one to put on a friendly face to the challenges that life throws in one's way.

"See You at the Top" was initially rejected by 30 publishing houses before Ziglar found a publisher who agreed in Louisiana after which it sold more than a quarter million copies and remains in print to date. The many books that he has written (about more than thirty) include ten that have been listed as best sellers and those that have been translated to more than 36 languages all over the world and have been distributed through Ziglar's official website as well as Amazon.com and the infamous Nightingale-Conant. Ziglar has also been a great feature in the enterprise system of America.

In 2001, Zig Ziglar achieved the Silver Buffalo Award from Boy Scouts of America which is the highest award in the United States for services to the youth. National Speakers Association seems to have had an absolutely unequivocal admiration for the man considering that the organization gave Ziglar the Master of Influence Award in 1999 and the Lifetime Member Award and also Cavett Award in 2001. This is further affirmed by the fact that The Council of Peer Award for Excellence Speaker hall of Fame by National Speakers Association was also given to Zig Ziglar as a symbol of unmatched skill in his field.

"The Ziglar Way" continues to have been a way of life for a great number of people after Zig Ziglar retired in 2010 and handed over the company Ziglar Inc. to his son and even after his death. His speeches have impacted the hearts and minds of people for an exceptionally long term and continue to motivate people years later. An unmatched name and figure where inspiration and hard work are concerned and the achiever of excellence in speaking, Zig Ziglar is a true legacy of America

Starting off humbly in Alabama and moving on to Mississippi and then to Lancaster, Zig Ziglar implemented the values that were instilled inside him by his mother in all that which he did and set an example for others. With his great verbal abilities, he helped many people recognize their inner selves and prosper in that which they desired. Zig Ziglar had firm religious and spiritual beliefs and worked by the motto of helping others. He understood the power of vision and the ways to implement your ideas. He never ever let the hope go away in any way, rather positivity was his strongest suit. Ziglar may have passed but he left a legacy, a legacy which gloomed and lit up lives of countless people and left them inspired. His words are so filled up with energy and passion that they gust like wind but fill people's minds with a new innovative energy. He achieved a great number of speaking awards and gained much love and fame before he died in 2012. 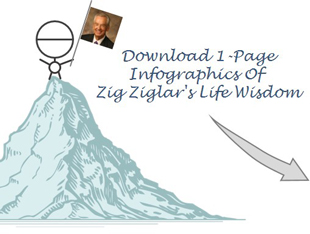 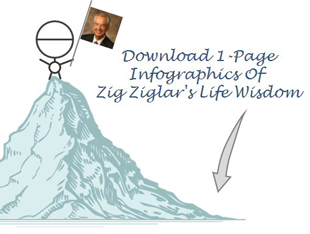